Earls Just Want to Have Fun 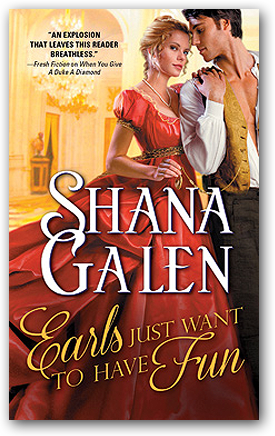 The coach began to move, and Dane frowned. He hadn't ordered his coachman to drive. Were they being waylaid by highwaymen? At least that would make the evening a bit more interesting.

And then he heard the scream.

Dane shot up and opened the curtains just as his brother's voice called out, "Open the door. Open the bloody door!"

Dane threw open the carriage door, even though the conveyance was still moving. It slowed briefly and Brook threw a wild animal inside the carriage. Dane jumped back, out of range of the creature's claws, just as Brook dove inside and slammed the carriage door. "Drive!" he yelled.

The carriage lurched forward, racing at a speed that could not be safe, even had they not been on the crowded streets of London. But he had no time to worry about the Jehu's dangerous driving. The creature lunged at him, scratching at his leg and managing to get a pretty good bite of his calf. "Ow!" he yelled, shaking it off.

It fell back, and Brook threw a hood over its head. That confused it, and his brother took advantage of its disorientation and bound its hands.

Hands? It was human?

"What the devil is that?" Dane asked.

"It's a who, and her name is Elizabeth," Brook told him, teeth clenched with the effort it took to secure the knot in the rope binding its—her—arms.

"That is a woman?" A woman had just bitten him? Damnation but his leg hurt like hell. He peered closer and noted the dirty dress she wore. His gaze traveled upward...yes, she was definitely a woman.

"That," Brook said, falling back into the squabs in exhaustion, "is Lady Elizabeth Grafton."

Dane had always thought that when the day came and his brother made a mistake—a monumental mistake, the sort Dane was exceedingly careful never to make—he would be glad. But damn if his leg did not hurt him, and he was more worried for his brother's sanity—and truth be told, his own safety—than pleased to be able to say, I told you so.

Dane glanced at the woman again. He didn't know who she was, but she was not the daughter of the Marquess of Lyndon. She was some sort of street rat. The smell of her alone was enough to prove bathing was not a luxury she frequently, if ever, enjoyed. And her language. No lady knew words like those she'd spewed at Brook. Dane didn't even know some of the curses. And the dirt. He'd have his valet clean these breeches immediately.

"Are you feeling well?" Dane asked. "Have you hit your head recently?"

But before Dane could dispute him, the creature—female, if Brook insisted—must have caught her breath because she began thrashing around again. She couldn't see with the hood over her eyes, and her claws were restrained, but she could still kick. Dane moved from one side of the seat to the other to avoid her quick feet. She would make a fearsome pugilist if her fists were as fast as her feet.

"I can't take her to Lord Lyndon like this," Brook said.

Dane frowned. He didn't like the implications of that statement. When Brook didn't go on, he suggested, "You could toss her back out on the street." He looked out the window and saw they were in Mayfair now. Perhaps they should not unleash such a creature on Mayfair. They might keep driving and leave her somewhere safer. Somewhere like Scotland. Or the Americas.

Return to Earls Just Want to Have Fun