The Good, The Bad, And The Ugly Men I've Dated 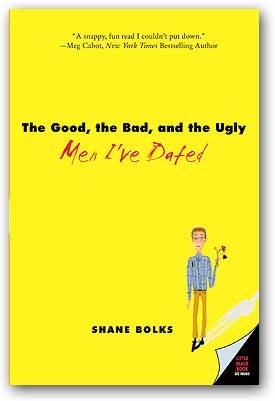 In my opinion, there are three truly great philosophers. Aristotle, Confucius, and Yoda. I didn't know about Aristotle and Confucius until high school, but I grew up steeped in Yoda's ideology.

My education began at age seven, when Dan and Sunshine took me to see Star Wars. The first of two life-altering events that year, it set off a chain reaction, the effects of which still alternately inspire and irk me. It's been twenty-five years, but my memory of the first time I watched Star Wars is more vivid than this morning's commute on the el.

Those scrolling white words. That riveting John Williams' score. The blackness the utter blackness of space in the first shot. Suddenly, I was part of that galaxy. I was on Princess Leia's rebel cruiser. I was Princess Leia.

In the real world, I was a geeky kid with glasses and crooked teeth, living in the Chicago suburbs, but during those two hours in Star Wars world, I was a princess: beautiful, witty, and poised. I was a rebel with a mission. I was part of the galaxy's last stand against the Evil Empire. I was...

"Rory? Rory! Are you listening to me?"

I blink, transported from saving the universe to saving room for dessert. Momentarily disoriented, I stare at the crowded dining area of Così on Michigan Avenue in downtown Chicago.

"Earth to Rory." The woman seated across from me, a titian-haired beauty who resembles a real-life princess, raises an annoyed brow.

"Sorry. I was daydreaming."

She snorts and digs into her salad, stabbing a cucumber with her plastic fork. "I'll just bet you were. And I know who you were dreaming about, too. I mean, of all the people to come walking into your office."

Hunter Chase. That's the second momentous event. On my first day of school, I tripped over a loose piece of carpet in Mrs. Allman's first grade class. I went sprawling, my skirt over my head, my tin lunchbox flung in a corner. All the kids howled, and I went beet-red. But when I stood up, Hunter Chase handed me my lunch box. "You okay?" he said, and he wasn't laughing.

I fell in love. How could I not? But my adoration of Hunter was based on more than his kindness that day. He was one of those kids that teachers look at and say, "Now that kid is going to be someone."

In a classroom full of knobby-kneed, snotty-nosed, rambunctious seven-year-olds, Hunter Chase shone. Shone as brightly as the burst of light from the Death Star when it explodes in Episode IV, as brightly as the dual suns on Luke Skywalker's home planet Tatooine. Like a tractor beam, his very essence drew me to him. Everyday I waited for him in the back of the room, standing among the cubbies where we stored our lunches and the hooks where we hung our winter coats. When he walked in, my little heart beat faster, and I inevitably gravitated toward him.

Unfortunately, so did all the other kids. Five seconds after Hunter Chase arrived, a circle formed around him, shutting me out. As usual.

"So tell me again," Allison says now through a mouthful of salad. "What did you do when you saw him? Were you completely freaked out?"

That's the understatement of the millennia.

"I almost fell over. He was walking down the hall with Mr. Yates and some of the other account execs from Dougall Marketing, and when I saw him, I almost tripped over my feet."

That's not exactly true. I actually did trip over my feet, spilling hot French vanilla cappuccino all over my crisply pressed white Oxford button-down. I yelped when the coffee scalded me and slammed my leg into a file cabinet, snagging my pantyhose in the process. It was first grade all over.

Hunter and Mr. Yates had glanced over at the commotion, but I didn't need my figurative lunchbox handed to me a second time, so I'd ducked behind the file cabinet, hoping they wouldn't see me.

"You almost fell over, huh?" Allison says. Her eyes, trained by her years as an interior designer, assess me, taking in the rumpled jacket of the navy suit I've buttoned snugly over my stained white Oxford. "I think your reaction was a little stronger than that. You sounded like you were having an orgasm when you called me on the phone."

"Allison!" I hiss, glancing around Così. "Keep your voice down, okay?" Creator! I hate it when people stare at me.

She picks up a breadstick and rolls her eyes. "Give me a break. No one here cares whether you have an orgasm or not." She grins, flashing perfect white teeth. "Well, except me. By the way...how long has it been since you've experienced la petite mort?"

"Not very long, for your information." I sit up straighter. "Just last night, in fact." Well, that's not exactly true, either, but there was the opportunity for an orgasm, so that pretty much counts.

Allison sits forward. "Ooh, do tell! Did you pick up some hunky mimbo at Bardo's, then drag him home and ravish him?"

Right. Like that would ever happen in Rory World. The guys who frequent Bardo's don't go for girls with straight, limp hair, mud-brown eyes, and a face that blends into the woodwork. "No," I tell her. "Tom came over. Tom. Remember him? My sort of boyfriend."

Allison sits back and picks at her lettuce. "I've actually been doing all I can to forget about Tedious Tom. God, Rory. How can you stand him?"

"Tom's not so bad," I mutter. I fumble for my veggie sandwich and take a small bite.

"Rory, he wears a pocket protector! I mean, he's like a bad caricature from Revenge of the Nerds."

I put the sandwich on the plate and push it away. "In case you haven't noticed, Allison, I'm not exactly Princess Leia. Han Solo isn't knocking on my spaceship."

"Oh, please. You could do much better than Tedious Tom."

"Nice." Allison throws her fork into her salad bowl. "What you mean is boring."

"No. Tom's not boring. In fact, we had a pretty exciting night last night." I fold my arms, resting my elbows on the table.

"Oh, really?" Allison arches a brow. "So, tell me about this exciting night. Did he take you out to some kinky new sex club? Did you answer the door wearing spiked heels and nothing else?"

I reach out lazily and poke at the bread on my sandwich. "Not exactly," I mumble. Knowing Tom, if I greeted him wearing nothing but heels, he'd ask if I was cold and offer to get me a sweater.

"So? What then?" Allison asks.

I study the menu posted behind her.

"Did he take you to a romantic restaurant? Light candles all over the house and feed you grapes on a bed of rose petals? What?"

I stare at her. "Who the Dark Side are you dating?"

"Fine! There was no Don Juan routine. We'd planned to go out, but Tom got busy and came over kind of late so..."

Allison narrows her eyes. "He got busy? Doing what?" She raises a finger. "And, so help me God, Rory, if you say playing video games with his loser friends, I will hit you over the head with this breadstick."

I rub the bridge of my nose where my glasses pinch. I can feel a headache starting.

Allison slumps back in her chair. "Oh. My. God. That's it, isn't it? He got busy playing Pac-Man "

She holds up a hand. " or whatever games the nerds play now and forgot about you."

"He didn't forget. He was just late. And he was very sweet about it. He even brought me flowers."

"Jesus, Rory! You have got to be kidding! And you still slept with the guy?" she shouts.

"Will you please lower your voice? I told you, he was sorry, and the flowers were really very sweet." Well, they were wilted and turning brown, but the thought was sweet.

Allison runs an exasperated hand through her long curly locks. "I just don't understand it. I mean, is he that good in bed? No!" She waves frantically. "Don't answer that. I don't want any carnal images of Tedious Tom imprinted in my brain."

"Look, Allie," I say. "He's a nice guy, okay? He's not my dream man or anything, but this is real life, not a fairy tale. Sometimes you just have to settle for what you can get."

Allison shakes her head. "No."

She pushes her plate to the side and leans over, palms flat on the table. "I mean, no. I'm not going to let you settle."

"I don't see as how you have any say in the matter. I like Tom. I'm content with Tom. I'm settling for Tom." I sit back, crossing my arms defiantly.

"Oh, yeah, right. Like Hunter Chase would ever be interested in me." Once he saw what a nerd I am, he'd sprint the other way.

"Girl, by the time we get done with you, Hunter Chase is going to be falling all over himself just to be in the same room."

"What do you mean, 'by the time we're done with you'?" A shiver of apprehension runs down my spine.

Sitting back, Allison grins smugly, a queen on her throne. She picks up her scepter—a salad fork—and points it at me. "You, Rory, are going to get the man of your dreams."

Return to The Good, The Bad, And The Ugly Men I've Dated