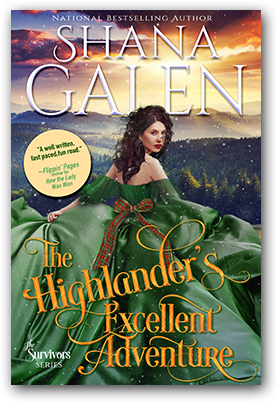 In this scene, Duncan and Stratford, former soldiers together in the war, travel to visit another soldier, along with two unwelcome guests—Emmeline, Stratford's distant cousin, and Ines, who is pretending to be a woman named Beatriz.

A few moments later, the coach slowed, and Mr. Fortescue opened the door and jumped out. No one emerged from the house to greet them and after Murray exited the coach, the coachman called down, "Are you sure this is where you wanted to go?"

"This is Wentmore," Murray said. Then he looked back at the women. "Stay here while we go inside and do a wee bit of reconnaissance." He started away.

Emmeline turned to Ines. "This looks worse than I imagined."

"Or if someone does, he does not welcome visitors."

Just then a crash echoed from inside the house, and the women exchanged worried looks. The crash was followed by the sound of raised male voices. Then the door banged open and Murray flew out. When he turned to look at the coach, blood ran down the side of his cheek.

"Caramba!" Ines said. She jumped out of the coach, but Murray had already gained his feet and was running back into the house. The door closed behind him. Miss Wellesley joined Ines on the weed-filled drive, and they listened to more shouts and then the sound of a rifle or pistol firing.

"I've had enough of this," the coachman said. He jumped from the box, untied the trunk and various boxes strapped to the back of the coach, and dumped them on the ground.

"Oh, yes, I can. I agreed to drive the man to Scotland. I didn't agree to this." He jumped back on the box, called to the horses, and drove away before the women could say another word.

Ines watched the coach disappear around a bend in the road. "I don't know whether to be terrified or thrilled."

"I feel a bit of both. Should we go inside and tell them?"

Another crash made both women jump. "Perhaps not quite yet," Ines said.

The door burst open again, and this time Murray fell out. He clutched his arm, blood seeping through his hand. Ines gasped, and he held up the bloody hand. "Dinnae fash, lass. It's a scratch." Then he winced and sank to his knees. Ines ran to him and put her arm around him to steady him.

"Is it your arm?" she asked, though she already knew. Her head was spinning and panic seeped in.

"The bastard shot me."

Ines gasped then stared at him in stunned silence. Emmeline was not so passive. She looked at Ines and Murray then seemed to make a decision. She straightened her shoulders and stomped past them. "This has gone on long enough."

"Dinnae go in there, lass!" Murray called. But she ignored him and opened the door then closed it after her. Murray looked at Ines, who suddenly realized she had no idea what to do next. She'd never seen a pistol ball wound before. She had no idea how to treat it or help Murray. She just knew she could not allow him to die. He stared down at her for another moment, and she became increasingly aware of the warmth of his body and that her arms were wrapped around it. She should let go, but she needed to steady him. Or perhaps she needed him to steady her.

"Did that scratch on my heid damage my brain, or did ye speak tae me in English?"

Ines opened her mouth, but it was too late. As Catarina always said, Ines's face was an open book, and Murray had read the writing there.

"So ye do speak English."

"I—" But what excuse could she give?

He held up a finger, cutting off her stuttering reply. "We'll talk aboot it later. Right now, I need tae fall over." And he did, taking her with him.

He landed on top of her, pinning her to the drive. It had once been a gravel drive, but she was thankful for the overgrown weeds to cushion her. Still, she could feel jagged pieces of gravel cutting into her back.

And yet, Ines didn't mind the weight of him. He was warm and solid, and he smelled woodsy and clean. There was no trace of the scent of cologne so many men in London wore. Mr. Podmore had favored a strong fragrance with a cloying sweet scent, and it had made Ines want to gag when she was in a closed room with him for too long. Conversely, now she had to resist the urge to bury her nose in Mr. Murray's chest. Except she really couldn't breathe with his weight pressing into her. She gave him a push, then a harder one, and she managed to free her torso from beneath him. Then after much tugging of her dress and her body, she freed her legs and finally her feet. She had to pause to catch her breath.

One look down told her this was a mistake. Her dress was soaked with blood, the material was dusty and dirty, and she could see pieces of her hair fluttering over her forehead. She blew them out of her eyes. The blood was not a good sign. She could see the crimson coloring the drive beneath Murray. She was no nurse, but she knew the bleeding must be stopped.

Ines pushed the Scot's good arm, trying to heave him onto his back. But he was heavy and large, and he didn't move. She adjusted her position, and with a grunt, pushed again. She raised his body just enough that she could wedge her shoulder underneath and push him higher and then onto his back. Panting heavily and wiping perspiration from her brow, Ines decided she would never manage to free him of his coat on her own. Instead, she took a breath then lifted the hem of her dress and ripped a good portion of her petticoat. She quickly bound the Scot's wound over his sleeve and tied another piece tightly around the arm of his coat to staunch the bleeding. Once inside—if they were ever allowed inside—they could remove his coat and clean the wound and see it clearly. She had no medical experience, but surely a surgeon must live nearby.

Resisting the urge to fall back and close her eyes for a moment, she instead looked up at the house, listening. All was finally quiet. That was either a good sign or a very ominous one. Ines ripped another section of petticoat and wiped Murray's face. The wound on his temple looked as though it came from a sharp object. She dabbed at it, determined it was not serious, then tried to clean the blood from his cheek. She had almost removed it all when his hand came up and caught her wrist. She screeched in surprise, and he shushed her.

"I will fash!" Whatever that meant. "You scared me." And not just by grasping her when she'd thought him unconscious. All that lost blood terrified her. What if he died? He'd used his good arm to take hold of her wrist, and it comforted her that he was still so strong. No one this strong would die, nao? He would live, sim?

The man was certifiably mad. What was it the English said? Daft? He was daft. "You need to lie down," she said. "You are bleeding, senhor."

"It is more than trifle if you fall over. Now stay here and be still until Mr. Fortescue and Miss Wellesley come out. They will either have tamed your so-called friend or you will need your strength to run." She could imagine the wild Mr. Pope bursting through the door any moment and firing at her with his rifle.

Murray let out a surprised laugh. "I willnae run. Nash needs a wee dose of convincing. That's all."

"From the sound of it, he needs a whole barrel of convincing." She cocked her head again. "Things have gone silent since Miss Wellesley went inside. I cannot decide if they are all dead or listening to reason."

He didn't respond, and she looked down at him to find his amber eyes were on her. "Why did ye pretend ye couldnae speak English?"

She should have been prepared for the question. She'd known from the beginning she'd have to answer it at some point. It was just that the shock of seeing him with blood streaming down his face had made her forget her ruse. She'd forgotten, too, how nervous he made her. All of a sudden, her belly began to flutter, and she felt her cheeks grow warm.

His brows came together in concern. "I'm not angry with ye, lass. I'm after an explanation."

That was a relief. Not that she would have been afraid if he'd been angry, but it was already difficult enough to speak to him. "I did not want—"

"Speak up, lass. A moment ago, ye were yelling in my ear."

She took a breath and spoke louder. "I did not want you to take me home."

But she was saved from answering when the door opened again. Ines and Murray both ducked, but it was only Emmeline.

"Mr. Fortescue and I have the matter in hand now. I think you had both better come in. In—I mean, Beatriz, let me help you with him."

Ines was trying to help Murray to his feet. He swayed once but caught himself. He cut her a glance. "Why do I have the suspicion yer name is nae Beatriz?"

"We can discuss it inside," Emmeline said, taking his good arm and lending support. Ines ducked her head carefully under his bad arm and the three of them hobbled toward the house.

As far as Ines was concerned, she would put that conversation off as long as possible. Except she knew it wouldn't be possible much longer. She'd been seen at the inn in that little village and surely Draven was out looking for her by now. If he didn't know she was with Murray, he would know soon, and he'd find her too. Then it would be back to London and Mr. Podmore or some other awful suitor. She'd have to bid her brief taste of freedom goodbye.

She stepped into the house, turning so Mr. Murray could squeeze in after her, and then stared at the wreck around her in horror. The paper curled off the walls, the rug was torn, and the furniture was smashed into pieces. When Emmeline finally moved in through the door, Ines caught her eye. "Are you certain this is safe?" Ines gave the cracked ceiling a worrying look.

"Safe?" Emmeline shook her head. "Most certainly not, but I'll try to keep you alive until dinner."

Return to The Highlander's Excellent Adventure