I Kissed a Rogue 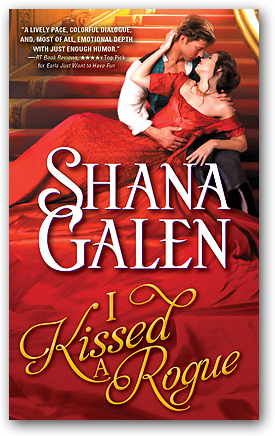 The church was all but empty. Brook's mother and her husband sat with his sister and Dorrington on one side, while the Duke of Lennox and the Earl of Granbury sat on the other. Behind them, one of the King's attendants took a seat. Brook supposed he was there to ensure the King's wishes were followed precisely.

There hadn't been time for Dane and his wife to come in from the country. If his older brother had been present, Brook would have asked him to stand beside him. As it was, Lila had no attendants, so perhaps it was for the best Brook stood before the bishop alone as well.

The bishop, a jowly man with white hair and a ruddy face, cleared his throat and began. For the first time since her father had brought her in, Lila looked up at him. Her warm brown eyes looked too big against her pale skin, which was as white as the silk gown she wore. The gown had a leaf design in silver netting, and she had a small silver leaf ornamenting her hair. Pearls circled her throat and danced at her ears, and with her hair piled high in a coil of ebony, she looked every inch the duke's daughter.

The bishop had droned on—something about God's will and not entering into marriage unadvisedly; clearly the bishop did not know about the King's will and advice—but now the officiate paused and cleared his throat again.

"Into this holy union Sir Brook Erasmus Derring and Lady Lillian-Anne Pevensy now come to be joined. If any of you can show just cause why they may not lawfully be married, speak now."

The bishop paused at this, looking first at Lila then Brook.

"Or else forever hold your peace."

Brook ground his teeth together and glared at Lila. She lowered her gaze again.

"I require and charge you both—" the bishop began.

"May I have one moment with my—er, betrothed?" Lila said.

She had spoken to the bishop, but her gaze was on Brook. He raised a brow.

"You can speak to him after the ceremony," the duke said from the pew.

"Just for one moment, Father," she said.

"My Lord," the duke said to the bishop. "Please continue."

"I am sorry, Your Grace, but I cannot. Lady Lillian-Anne must come to this union of her own free will." He glanced at Lila. "If you need a moment, my lady, you may use the sacristy."

She nodded and gave Brook an imploring look. With a shrug directed at his mother, whose face was the picture of disapproval, he followed Lila to the side chamber. The room was full of books and vestments, all in order, and in the middle were a small altar and a sacrarium, where the bishop washed his hands.

Lila stood before the altar, like a sacrificial lamb. Brook stood just inside the door, keeping it open for propriety.

"Delaying the inevitable?" he asked.

"I had to make certain you knew this was not my doing," she said, her voice breathless. "I never told my father to go to the King. I did not want to force you into marriage."

Brook leaned a shoulder against the doorjamb. "I must admit, your previous refusal was quite definitive and robust. This sudden change of heart surprised me."

"Oh, stop speaking so formally! I am trying to tell you I have no more choice in this than you."

"The bishop will ask for your consent in a few moments. All you need say is I won't."

"And then my father will disown me, and Vile Valencia will make certain I am shipped off to Cheapside to live with my mother's great-aunt, who is so poor she can ill afford to feed herself much less me."

"Beezle will find you inside a week there."

She closed her eyes, seeming to summon patience. He couldn't blame her. He was being an arse.

"You must be the one to say you won't have me."

"Oh, no." He pushed away from the jamb. "And have the King throw me in the Tower? Not bloody likely."

"He won't throw you in the Tower." She folded her arms under the square neck of the gown, pushing her breasts up until they swelled at the bodice.

"I'm not taking that chance."

"Then we have no choice but to marry."

"I assumed that was the reason we were both in the church at half eight in the morning—you in your bridal silk and me in this stiff-necked cravat Hunt tied far too tightly."

"I want to be thrown into the Tower even less."

"Nice to know I rank above imprisonment."

"Barely," he said, pointing a finger at her. "Besides, the King mentioned annulment. I'm to keep you safe and capture the man who killed Fitzsimmons and abducted you, and the King will see the union annulled."

"How the devil do I know? On whatever grounds His Majesty fabricates."

"But what if you don't capture this Beezle, or whoever it was?"

"And what's to happen to me after the marriage is annulled?"

"I don't know, and I don't care." He glanced behind him and into the sanctuary. Lennox had risen and was looking pointedly in his direction. The King's attendant was scribbling something on a sheet of vellum. "Let's finish this."

He turned to exit the sacristy, but her hand on his upper arm made him pause. He looked down at the gloved fingers, so white against his dark blue coat, and then at her pale face.

Return to I Kissed a Rogue