How the Lady was Won 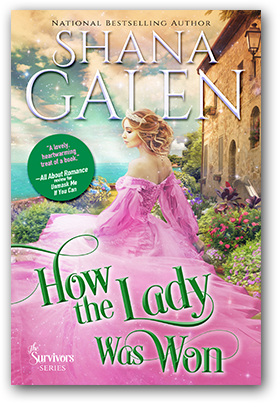 Lady Daphne was in trouble. Again. Trouble seemed to follow her like a hungry puppy, and she could not resist feeding it. Except this puppy had grown into a savage beast and wanted to bite off her arm.

"I see your friend the Earl of Battersea is here," Lady Pavenley said, her gaze directed across the crowded ballroom. Her tone was one of mild indifference, but Daphne knew she was gloating. She'd already seen the earl, and it had taken all of her willpower not to turn and flee. He hadn't seen her yet. She hoped. How many events had she left early in the past few weeks in order to avoid him? She'd stopped counting.

"I do hope he asks someone besides Lady Daphne to dance," Lady Isabella said. "I find the silver at his temples quite dashing."

Daphne found everything about the earl more disturbing than dashing. Of course, she'd thought him dashing at one time too. That had been her mistake. Now she just wished he would leave her alone.

The three ladies stood in a circle at the end of the ballroom. Daphne imagined they looked like a trio of flowers. She wore her signature pink, Lady Pavenley wore violet, and Lady Isabella wore yellow. Daphne was under no illusion that either of her friends—if someone who would just as soon stick a knife in your back as pass you the salt could be called a friend—had any concern for her. Like the rest of the ton they were here to watch the show. And that show's fifth and final act would only satisfy if someone was scandalized. No doubt Daphne's companions hoped it would be Daphne.

"I have no interest in dancing with him," Daphne said, hoping she sounded airy and unconcerned. In reality, she was scanning the ballroom, looking for the nearest exit.

"Well, not all of us are married to war heroes," Lady Isabella observed. Her own husband was in his mid-forties with bushy eyebrows and hair that poked out of his ears. Like Daphne, she had married a man of lower rank. Lady Isabella was the daughter of a marquess and her husband was only a lowly baron.

Lady Pavenley tittered. "Yes, Mr. FitzRoy is quite dashing. He dashes about here and dashes about there. He is forever dashing about." Noting the absence of Daphne's husband was a favorite pastime for Lady Pavenley, who was married to the Earl of Pavenley. He was a notorious drunk who rarely attended a ball without vomiting on the floor or pissing in a corner.

Daphne observed, not for the first time, that the three of them should have been friends. Society liked to call them the Three Suns, ostensibly because the earth revolved around them, but also because they were all considered beauties who outshone other ladies. Daphne was the most conventionally beautiful, being blond and blue-eyed. But though her hair was pale, she had naturally rosy lips and dark brows and lashes. Added to that she had her grandmother's aristocratic cheekbones, her mother's lush figure, and her father's strong straight nose. More than one man stopped and stared when she passed.

Lady Pavenley had dark hair, almost blue black, and deep violet eyes. She was tall and regal and quite voluptuous. Lady Isabella had chestnut hair with tones of red in it that Daphne was never quite sure were actually natural. She had large breasts that always looked like they might spill out of her low-cut gowns. They had done so on more than one occasion, and the result had been poets who wrote sonnets to her ruddy nipples and pale orbs.

But the three were not friends, though they put on a show for the eyes of Society. In reality, they were enemies who had called a truce because if they'd gone to war they would have ruined each other so thoroughly that only a few scraps of hair and a bit of lace would have remained.

Instead, they ruined or elevated others. One nod from the Three Suns toward a debutante and the girl was sure to be a success. One cross word about her dress and she would have to leave Town in disgrace.

Daphne had no thirst for blood. It wasn't until after a Season or two that she realized the power her favor or censure held. She'd ruined a girl's chances at a good match completely by accident. If she'd been in a foul mood and frowned in the direction of an unmarried young lady, the ton would follow suit.

These days Daphne tried not to smile or frown at any unmarried ladies, but the other two suns were not so kind. They relished their power and status. Lately, Daphne had grown rather tired of the ton and the endless social engagements. She wanted something more than mind-numbing chatter and endless gossip.

"Where is dear Mr. FitzRoy tonight?" Lady Isabella asked. It was the question one or the other of them asked every time they were together. Surely they knew she had no idea, but it was undoubtedly interesting to see how she would justify his absence over and over again. His absence was humiliating, and the other Suns made sure to humiliate her as often as they could.

Daphne knew FitzRoy was back from the war. She'd heard he was living with his sisters and father in the country. But lately he'd been seen in London, so he must have a residence here. As a woman, she couldn't very well search him out.

And he hadn't bothered to search for her, though she was not difficult to find.

Unless she wanted to admit she hadn't seen her own husband in seven years, Lady Daphne had little choice but to play along with the Suns' game. "You know him," she said, though of course none of them knew Colin FitzRoy. "He has important work to do."

"What sort of work?" Lady Pavenley asked with a sneer.

"War hero work," Daphne said, then added, "He mentioned deciphering a document. It's top secret, of course. He cannot even tell me what the coded missive contains."

The two ladies looked interested, despite themselves. Daphne knew they didn't want to believe her, but they were not quite sure if some of what she said could be true. One day she'd be exposed for the liar she was and publicly humiliated.

That night was not tonight.

Unless the Earl of Battersea found her. He was making his way across the ballroom now, and this was her last chance to escape. "I think I shall find the ladies' retiring room," she said, turning to go.

Not wanting to be left alone, Lady Pavenley also moved. "I shall go too."

There was safety in numbers, but it was temporary. She had to escape the ball, and she couldn't do it with the Suns circling her. Walking ahead a bit, she spotted the young son of a peer. He looked as though he'd been scrubbed and shaved within an inch of his life. The still soft flesh of his jaw was ruddy from the razor yet. As she passed him, she grasped his arm and whispered, "Lady Isabella wants to dance with you. Go and ask her."

The lad's eyes widened, but he didn't waste any time stepping before Isabella and bowing almost into her bosom, effectively detaining her. That tactic would not work with Lady Pavenley. She was too tall and imposing to be approached by a man who didn't know her. Instead, Daphne scooted past a woman about her own mother's age. She nodded in greeting then said, "Lady Pavenley is looking for Lord Pavenley. Could you help her?" The matron's nostrils flared with interest, like a hound scenting prey. And she arrowed straight for Lady Pavenley while Daphne slipped out of the ballroom.

Once outside, she looked left then right. She couldn't very well walk out the front door. People were still arriving, and she would be seen. It might be a half hour before her carriage could be found, and by that time Battersea would find her. That meant she would need to go out the back, past the mews. Once on the street she could hail a hackney and go home. She'd send one of her father's footmen to tell the coachman to return to the duke's town house.

Most of the town houses in London were quite similar in layout, and it did not take her long to find the servants' back door and exit along a dark path. At the end of it, she saw a gate and, on the other side, the row of mews. Thank God. She was free of Battersea and free of all the whispers and speculation about her absent husband. She started along the path, careful of her footing as it was dark. Too late she saw the man step out before her. He was large and dark, a cloak obscuring his body and a hat pulled low on his forehead.

She gasped and stumbled backward, almost losing her balance. Was he a thief? A murderer?

The use of her name did little to quell her fear. "How do you know my name?" It couldn't be Battersea. She'd just seen him inside.

"How do you not know mine?" He lifted his head and removed his hat, bowing to her in a sort of mocking way. It might have been dark, but she knew those features.

He arched a brow at her. "Let's find somewhere we can talk, wife."

Return to How the Lady was Won