The Making of a Duchess 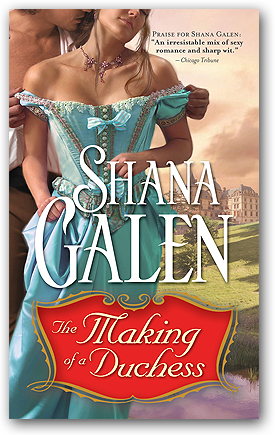 A moment later, the duchesse was gone, and Sarah was alone in the ornate drawing room. She turned this way and that, afraid to touch anything. Oh, how she hated all of this lying and playacting! But the faster she completed this mission, the sooner she could return to life as a governess. Perhaps she could find the evidence Sir Northrop wanted now, and then she would be able to tuck Anne and Edmund into bed tonight.

With new purpose, she moved about the room, looking for a desk or table with a drawer—anything that would hold or conceal papers. She passed a large painting of an Italian noblewoman and then halted and whipped back around. Was that a—no.

She leaned closer. Was that a Titian?

Oh, Lord. Oh, my. Just how wealthy was this family? An actual Titian! And then another thought occurred to her—with wealth came power. What would happen if the Valères discovered she was not who she claimed? Would she be thrown in prison?

Even worse, what if the Duc de Valère was a spy? If he realized she had found him out, he might see the need to be rid of her. Permanently.

She put a hand to her belly to still its roiling. She could not worry about that right now. She had to keep her chin up and her wits about her. She tried focusing on the Titian.

She wished she could put her spectacles on in order to read the signature, but The Widow had forbid her to do so unless absolutely necessary. So Sarah squinted and leaned in close, lifting one hand toward what looked like a scribble.

"I wouldn't touch that if you want to keep my mother's favor," a deep voice said from behind her.

Sarah swung around, knocking a bowl off a nearby side table. It shattered loudly when it hit the gleaming wood floor.

"Oh!" She looked from the shattered bowl to the man standing in the drawing room's entrance.

It was him. She knew it.

This was the Duc de Valère. The spy. The traitor. The man who might kill her if he knew what she had been sent to do.

Her stomach clenched again, and grabbing the vase nearest her, she promptly cast up her accounts.

Return to The Making of a Duchess