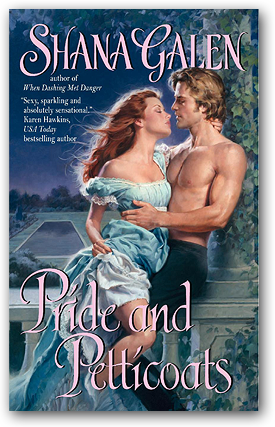 Freddie plowed through the house, tugging Charlotte in his wake. "Wilkins," he barked at his valet, who was scampering up the stairs behind them. "I do not wish to be disturbed the rest of the afternoon. No." He stopped suddenly and Charlotte collided with him. "The rest of the week." He looked at his wife meaningfully. "We have work to do."

He might not relish spending even one more moment in his wife's company, but he needed her to capture Pettigru. There were worse assignments than squiring a colonist about and pretending to be smitten by her. He couldn't think of any at the moment, but he was certain there had to be worse.

"Work to do. Yes, my lord," Wilkins wheezed, finally reaching the top of the stairs. "But we must change your clothes. If I do not see to that stain immediately—"

"Dash the bloody stain, Wilkins!" Freddie dragged Charlotte along the corridor until they reached his room, then he burst in, surprising a maid who was tidying the bed. "Out," he said, and she scurried past Wilkins, almost knocking the slight man over.

Charlotte wrenched her arm free of Freddie's hold. "That was certainly entertaining." As usual, her voice was dark and slow and damnably unperturbed. "What do you do for an encore?"

"I'll catch a spy." Color rose in her cheeks, but he cut her riposte short. "Stubble it," Freddie said, rounding on her, feeling more perturbed than he had in a long, long time. "If we made a scene in there, the fault lies with you, madam."

"Me? Me?" She put a hand over her breast as though she'd been stabbed. "First you insulted me, and then you allowed your mother to do the same. You are fortunate you escaped with merely a stain on your breeches."

"And you're fortunate I'm a gentleman and a patient one at that. Had you used even a modicum of the manners I spent hours attempting to drill into you yesterday, we wouldn't be in this position. Further, if your maid had any sense of civility—"

"Don't you dare bring Addy into this!" She shook her finger at him. "Blame me if you must. I expect nothing better from you, but no southern gentleman—no American—would disgrace a lady so."

Freddie made a show of looking about the room. "Is there a lady present? I haven't seen her."

There was a gasp, and behind Charlotte Freddie saw Wilkins take a startled step back. Freddie glared at the valet, who retreated further, and shut the bedroom door. Unfortunately, his wife had abandoned her position in the corner of the room and was now steadily advancing on him.

"No amount of money is worth this treatment! I want out of this so-called marriage and out of this godforsaken country as well."

Freddie shook his head, quelling his impulse to yell back at her. "Why do you hate us so much?"

"You killed my family!"

"Do you blame the whole country for the actions of a few?"

She looked away, and Freddie walked toward her, stopping a foot away. "I'm sorry for your loss, but I am not responsible. Hating me will get you no where."

Freddie raised a brow. "My kind? I'm a patriot, motivated by allegiance to my country, as are you. Are we truly so different?" He reached out and fingered a lock of her hair.

"Yes, we are different. You—you're a warrior. You won't stop until you win. My father was like you. He never listened to reason, never considered compromise. You call me prejudiced, but tell me honestly, is there any room for doubt in your mind that Cade is innocent?"

"I play at being harder than I am, but how else am I to protect myself? I've lost everything. I have to harden my heart. It's all I have left. But you have everything. What are you so afraid of?"

He looked at her, alarmed that she seemed to see through him so easily.

"Why are you so unwilling to let your guard down? Afraid you might feel something more than disdain for a lowly colonist? Afraid all your pride and lofty words mean nothing when your heart is exposed?"

Freddie's chest tightened. She hadn't hit the target, but she was not far from her mark either. What was it about her that unnerved him? Was it the unexplained thrill of opening his bedroom door to her the night before? The need to protect her from Society's barbs—a need he couched in lessons and lectures? Or was it the yearning to kiss her, to touch her that he felt every time they were in the same room? And what if he were to act on those needs? What then?

She scared the hell out of him. Defenses up, he struck back. "It would take more than you—a dowdy excuse for a woman—to expose my heart."

Freddie glanced at her just in time to see the blow coming. Years of training had honed his reflexes, and he caught her fist without thinking. The impact jarred him and stung his palm, but he had her. She tried to pull free, and there was a momentary tug-of-war, and when Freddie looked into her face her eyes were shooting angry sparks at him.

His hand stung. Someone had taught the colonist to throw a punch. Now he'd show her that her actions invited equal and opposite reactions. He'd show her that she was nothing more to him than a means to an end. Hand still wrapped firmly around her wrist, he yanked her to him. She tried to back away, but he held fast, then slipped one arm about her waist, pulling her close until she was flush against him and breathing hard.

"You can give it but you can't take it, is that it?" he said, his own breath coming in choppy bursts now as well. His flesh might be heated, but his heart was firmly shielded.

"I can take anything you bastard English throw at me. Or have you forgotten the War of Independence?"

His hand flexed on her waist, the threadbare bombazine hiding nothing of the sweet curve of her back and the swell of her hip. She was warm—as hot as the fire in her hair. And he could feel those silky tresses against his hand. Her hair had come free some time during their skirmish, and now it tumbled down her back and teased the skin of his hand and arm. "So this is to be war between us?" he asked, his voice little more than a whisper.

"What else? Neither of us can forget what the other is," she retorted, but her rich voice was even lower now. Ragged and husky and full of sweltering days and sweaty nights.

"I'll make you forget. I'll make you surrender." He bent his head close to hers, brushing his lips against hers with just a hint of pressure. She inhaled sharply and tried unsuccessfully to pull away.

"Only if you surrender first."

"Never." And this time he did not check himself. He took her mouth with his in a relentless kiss. She gasped, and her body went rigid with shock, but he gave no quarter. He took her full, honey-thick lips, parted them, and swept inside her mouth, teasing her tongue with his own. And still she resisted.

But he'd brook no retreat. He pushed her to the limit, bending her body back, pressing her hard against him, and molding her mouth to his until she returned the kiss with a violence equal to his own. His adrenaline surged, and he was heady with the smell of victory. He possessed her now, and all talk of exposing his heart was ridiculous. It was she whose heart was in danger.

And then suddenly he was no longer restraining her. She moaned deep in her throat and ceased all resistance. His hands were wrapped in her hair, caressing the skin of her neck and cheek, and her own hands were like small, kneading paws against his chest. Pushing and caressing and demanding more of him. He gave it, kissed her with the passion and violence, and still she did not back down. Now she was pushing him, and he was not at all certain he wanted to let her any further inside. But at the same time his mind resisted, his body ached for her.

He took a step back, moving toward the bed, and taking her with him. He wanted her on the velvet counterpane, her hair spread out beneath her like a fiery halo, and her pale skin an enticing contrast to the scarlet fabric.

He angled directly for his bed, and she went willingly, not seeming to notice where she was or what he was doing. But he knew, and his mind sounded the cannon to cease the charge. He could not do this. He would not.

Her hand slipped inside his shirt, somehow finding the chink in his armor, and he drew in a sharp breath as flesh met flesh. Oh, dash it all to hell, he thought, bending to sweep her into his arms and thus onto the bed. And then she was beneath him, all softness and curves and her sweet feminine smell. He wanted to drive into her, to press his body even more intimately against her, to surrender to his need for her.

At the thought, a shock rippled through him, and he reared up, backing away from her. Slowly, she opened eyes hazy with desire and it took all he had to resist returning to her arms. She blinked, ran a tongue over her swollen lips, and then, thank God, he heard a pounding on the door.

He jumped up, and for the first time since they'd entered the bedroom, his mind was working.

"Alfred William Dewhurst!" his mother bellowed from the other side of the door. "Do not touch that woman! You are impotent, do you hear me? Impotent!"

Freddie looked at Charlotte—sprawled on the bed, her skirts ruched to her knees, her hair in wild disarray, her face flushed with passion—and for once he wished his mother were correct.

Return to Pride and Petticoats