The Seduction of a Duchess

A Sons of the Revolution story 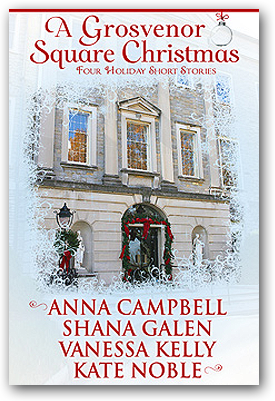 The countess's arm was twined with...Rowena's breath seemed to whoosh out of her, and she could not manage to draw enough in again. Lady Winterson's arm was linked with Gabriel's as the two descended upon Rowena. Watching them come inexorably closer, she suddenly had the urge to run. It was a most unbecoming sort of urge, especially for a woman of her position and her maturity. But she suddenly felt eighteen all over again, and prone to immature action.

"My dear Duke and Duchess de Valère," Lady Winterson said, curtsying prettily. Julien and Sarah curtsied in return and Julien said...something. Rowena was no longer listening. She was staring at the man beside the countess. It was he. Gabriel. And she was suddenly awash in memories. She and Julien had ridden away from their burning chateau, away from the bloodthirsty peasants, and into the security offered by the woods. Just as she'd thought they were safe, a man jumped out at Julien and her, frightening both them and the horses. To her relief, it was Gabriel, who offered to help them escape and, a day later, saved their lives. She remembered her nausea when they'd been attacked on the road and Gabriel had shot a man in the head to save them. He'd done it—murder. For her and her son.

She looked at Julien before returning her gaze to Gabriel, who watched her unabashedly. Did her son not recognize the man, their savior? Did none of the boys remember their servant? He looked so much as he had all those years ago, though Rowena realized that he must be now, what six and thirty? He still had the long straight nose of his Gallic ancestors and the thick black hair, though he had acquired a few patches of gray at his temples. His eyes were pale greenish blue and framed by thick brows and lashes. He had high patrician cheekbones and a strong noble jaw, though he certainly was no nobleman.

"Allow me to introduce the most celebrated man in all of England," the countess said, finally indicating Gabriel. "This is a fellow Frenchman, Monsieur Lemarque. But he is better known as the French Fox."

Bastien gasped. "Good God, man, is that you?" He cut his gaze to his mother.

Most of the family was aware of her fascination with the French Fox. She'd followed the reports of his feats of bravery religiously. The way he'd snatched innocent aristos—mothers and children, old men—from the blade of the guillotine was nothing short of heroic. He escaped even the most intricate traps the enemy laid for him, seemed to laugh in the face of danger, risked everything for men and women to whom he owed nothing. She was half in love with the mysterious spy already.

And Gabriel was the French Fox. It all made sense now. Gabriel, the man who had once held her hand when they'd been hiding from revolutionaries—"Do not fear, duchesse. I will die before I allow these devils to so much as look at you."

Now Gabriel smiled thinly and glanced at Lady Winterson. "That was supposed to be our secret, my lady."

Rowena took a slow, shaky breath as heat flooded through her. His voice. That accent.

Lady Winterson waved a hand. "Oh, but you know I cannot keep a secret. It is much more fun to share. And, Your Grace"—she looked at Rowena—"I have a secret for you."

The countess was smiling. "Monsieur Lemarque has asked for an introduction. I believe he would like to claim this dance."

Return to A Grosvenor Square Christmas