The Claiming of the Shrew 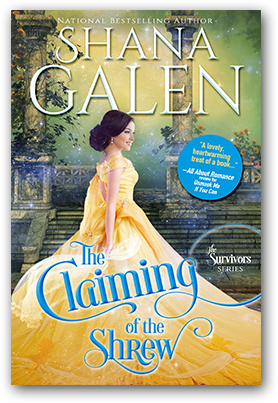 "Senhor. You have come, as you promised."

"I'm a man of my word." He moved forward, entering the parlor.

"You have met my sister?"

He looked back at Ines for a moment, but it was Catarina who held his gaze. The younger sister said something in Portuguese. He knew a bit of the language, but he wasn't paying enough attention to translate. Then the younger sister exited to the bed chamber and he and Catarina were alone.

They looked at each other for a long time. Finally, Catarina said, "I will ring for tea."

"I know your customs. It is appropriate to serve a caller tea."

"I'm your husband. I think we can dispense with the social customs."

Her dark eyes flashed fire before she quickly lowered her lashes. There was the temper he knew so well. She was attempting to control it for the moment.

With a savage yank, she pulled the bell summoning a servant. "So now you wish to acknowledge me as your wife."

"Nor did you claim me. Do you know how long I waited for you to return?" Her brows rose in challenge.

She'd waited for him to return? He hadn't known that. He'd always assumed she'd used their marriage to escape. Had she felt something for him? Perhaps he wasn't the only one who'd been affected by that kiss.

A knock on the door interrupted them, and Ines hurried out of the bed chamber to answer. Benedict fell silent as the young woman ordered tea and cakes before slipping back behind the door, where she was most certainly eavesdropping.

"Please sit down," Catarina said, indicating the couch across from her. "If I must look up at you for any length of time, my neck will ache."

"I thought we were following convention."

Her brow creased in a way he found quite adorable.

"I cannot sit until you do, Mrs. Draven," he explained.

She gave him a withering look but took her seat. He followed, sitting on the couch she'd offered him. They sat in silence for a moment, the sound of the crackling fire the only respite. She was so lovely. When he'd first met her, there'd been something wild and fierce about her beauty. Now she looked perfectly polished and sophisticated. Only her eyes gave a hint that she was that same untamed woman he'd married all those years ago.

The moment dragged on, as she too looked at him. He wondered if she wished he were young and dashing. He cleared his throat and she shifted restlessly. And then they spoke at once. "You look beautiful," he said at the same time she said, "I need an annulment."

Silence descended like a shroud. He'd known an annulment was what she wanted. He'd come willing to grant it to her. After all, the marriage wasn't valid. He'd never considered it so, but he understood that her religion was important to her. She considered the marriage valid and could not in good conscience marry another man without annulling it.

"You have papers for me to sign?" he asked.

Her eyes widened. "Yes." She might have been surprised at his easy acquiescence, but she didn't let that forestall her. She jumped to her feet, forcing him to rise as well, and collected a sheaf of papers that had been sitting on a side table. "I do not have a pen," she said, looking about distractedly.

"We can send a servant for one. Let me see them." He held out his hand. She gave them and took her seat again. He sat as well, looking over the request to the Pope for the granting of the annulment.

But he could hardly focus on the words. His eyes kept returning to Catarina. She sat nervously pleating her skirt. Was she nervous he would not sign or nervous he would?

"You said you want to marry someone else."

"Why don't you ever call me Benedict?"

She blinked at him, her long lashes a veil. "I suppose because I don't feel I really know you, sen—Benedict."

He knew her lips were like silk when he kissed them.

He'd come willing to grant the annulment. He should grant the annulment. She was young and at the very beginning of her life. He had already lived what felt like two lifetimes. She'd only married him because she'd been desperate to escape the abusive man her father had promised her to, and his name would give her protection.

She hadn't wanted him. She did not want him. What could she possibly want in a man old enough to be her father?

And was he hoping to be humiliated? That was exactly what would happen when she laughed at the very suggestion of giving their marriage a chance.

Not that he was entertaining that suggestion.

"And you know this man you plan to marry?"

"It would have been easier to say you know him well or you love him. Why refuse to discuss it?" Why did he care? Why not sign the papers and let her go?

She rose, the skin of her neck coloring. "Because it is not your concern." The flush rose from her neck to her chin and her cheeks.

"I'm your current husband. I think my successor is my concern."

"I knew you would make this difficult!" She extended her arms wide. "Please just sign the papers!"

He raised a brow at her show of temper. She wanted this badly, but something was not right. He had the same sensation now that he'd often felt when a battle did not end in his favor. In battle there was a point when he realized he'd been flanked or the reserves would arrive too late or his enemy had a better position. At that moment, he felt a wave of dizziness. It wasn't enough to unseat him from his horse or make him stumble, but it was enough to disconcert him.

Her expression turned from anger to fury, and he wondered if she would throw something at him. He also wondered if she could possibly look more ravishing than she did at this very moment. But before she could reach for the closest object, a tap sounded on the door. Catarina smiled in triumph.

She lifted her skirts, but Benedict held up a hand. "Allow me." He strode toward the door and opened it.

But a servant with a tea tray did not wait outside. Instead, a man a few years his senior stood there. "You must be Colonel Benedict," he said. Benedict immediately recognized the Spanish accent.

Return to The Claiming of the Shrew