The Spy Beneath the Mistletoe 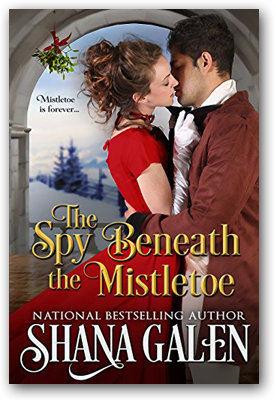 "I think you should go."

As a child, he'd always run from bullies and conflict. He never faced the problems head-on. Would he run now? "Give me another chance," he said, standing his ground.

He dropped his coat and scarf, and because she hadn't said no, pulled at the bow closing the nightgown at her neck. "Let me show you what marriage to me might be like. That first time—"

Too late, she swatted his hand away. "I don't think that's wise."

"Fiend seize wise," he said, trailing a finger down the soft, exposed skin just below her neck. "Why can't you and I, for once, be spontaneous, passionate, reckless?"

"Reckless?" Her voice was breathy, and the color had risen in her cheeks. "Reckless was taking those books from the Dungeon."

"So you haven't forgotten those. Would you like me to show you what I learned?"

"That wouldn't be wise."

"Oh, no. Definitely not." He loosened the tie on her robe and pushed the garment off her shoulders.

"What are you doing?" she asked.

"Yes." He tugged at another ribbon on her nightgown.

"All of my clothing must go?" She sounded appalled.

He felt the pulse of lust beating in his veins. He'd never seen a woman completely naked before him.

The ribbon parted, exposing more of her soft skin. "You're going to like this." Dear God, he hoped she would. He hoped he could remember what he'd had in mind when he finally had her stripped naked. Her gaze never left his as he slid his finger down her lips, her chin, her neck, and into her cleavage. Another tug, and the ribbon revealed a glorious sliver of pale flesh.

Return to The Spy Beneath the Mistletoe