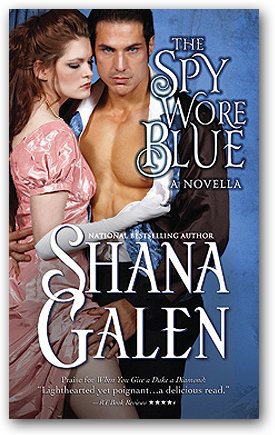 Blue could no longer feel his fingers or his toes. The snow was as high as his knees, and though he was not a particularly tall man, he was not short either. He stood shivering, staring at the third-floor window of the building across the narrow Italian street in Naples. The dark stone blended with the approaching dusk, but the glow of the warm windows gave the building a cozy feel.

Somehow Blue doubted his reception would be quite so cozy.

With a sigh, he started for the building's entrance. He paused in the vestibule for a moment, allowing the warmth to settle over him and melt away some of the chill. He gave the steps a grim stare and began his ascent. It was better this way. Better to meet her here and not the theater, where she might inadvertently—or quite advertently—reveal his true identity.

She was one of the few who knew it.

He climbed the stairs, nodding, and saying, "Buona sera" when a diminutive white-haired man hobbled past him. When he reached the third floor landing, he stopped before the door to the flat facing the street and knocked once, quietly. No need to attract the attention of the entire building.

No answer. No movement inside. He hadn't expected her to be home. She would be at the theater at this time of the evening. With a quick glance over his shoulder, Blue withdrew a long, thin metal piece and inserted it into the keyhole. A quick twist and the door opened. Did the woman have no sense whatsoever? A child could pick that lock. He stepped inside, a floorboard creaking under his weight, and closed the door softly behind him. She'd left a brace of candles burning on the table—how could anyone be so careless?—and half her wardrobe flung about the threadbare rugs on the floor. Books, flyers, papers, and magazines were scattered across the small worn couch and sunken chair. Teacups littered the lone side table, and a fat orange cat eyed him from its place on the bed, partially hidden from view by a Chinese screen. What might have been her supper sat, only half eaten, beside a novel and a musical score on the small dining table. She must have been reading and lost track of time.

But for all the clutter, the flat was warm and comfortable. It was tiny—there really wasn't room for a couch and chair—but he knew she didn't mind disorder. The bed in particular beckoned. The coverlet looked fluffy and soft and the pillows plump and inviting. How long since he had slept? Days? Weeks?

What would it hurt to lie down on the bed for a quarter hour? She was at the opera house. She wouldn't be back for hours. Knowing how opera singers were, she might not even return home tonight. He had nowhere else to be.

Blue mulled the idea over in his mind as he lifted this and that, inspecting her belongings. He didn't need to search her room—she wasn't a suspect of any sort—but he was a spy. He could hardly resist. And he wasn't searching exactly. He was only having a look about. No harm in that. He didn't see wine bottles or any gin, but he had no doubt if he searched hard enough, he would find her hiding place.

What amazed him was how many little knickknacks she had—a porcelain figurine here, a little bell there, a small bust, a half dozen paintings needing to be hung. He wasn't certain where she would find the space. She already had tapestries, shawls, and paintings hung on almost every available wall surface. Most of the paintings featured shiny fruits in large wooden bowls. Looking at all of the fruit made him suddenly quite hungry.

He lifted a rosetta roll from her dinner plate and bit into it while making his way to the bed. "Hello, cat," he said to the feline staring at him with large green eyes. The cat jumped off the bed and walked gingerly, nose in the air, to the couch. Blue thought about removing his boots, then decided against it. He might need to be up and out in a moment's notice.

He lay down on the bed before remembering he hadn't locked the door again. It was careless to leave it open, but it was a testament to how weary he was that he decided to leave it be for the present. Blue put his hands behind his head and stared up at the ceiling. She'd hung little crystals above the bed, and the light reflecting from the brace of candles danced and flickered above him. It was pretty, if one liked that sort of thing.

Blue didn't know whether he liked it or not. He had a room he rented in London. It contained a bed, a desk, a chair, and a wardrobe. What else did a man need? He had been thinking about buying a rug, but thus far it had been too much effort. He would have to consider size and color and texture, and when did he have time to shop for rugs? Blue rolled over and studied Helena's rug, moving aside several garments to see it better. It was thick and plush and a sort of cream color. He liked it. Maybe he should ask where she'd acquired it.

He closed his eyes briefly, and though he might have expected to dream of enormous bowls of fruit chasing him or flickering crystals turning into roaring infernos, he dreamed of nothing, succumbing to the black peace of sleep.

She had not left the door unlocked. She might have been in a rush. She might have forgotten her gloves—again—but she remembered locking the door because she'd dropped the key three times. She remembered because her nerves were frayed. This was the last night they would perform Rossini's L'Italiana in Algeri before closing for a fortnight to ready the next production. She wanted her last night on stage as Elvira to be perfect.

Her fingers had been shaking badly, as they did at times when life felt particularly overwhelming, and she hadn't been able to lock the door. She'd clenched her fists tightly and willed her hands to still before successfully inserting and turning the key.

Now, when she put the key soundlessly in the keyhole, she found the door unlocked. Helena held her breath, and the cheers and applause of the audience faded from her mind. All she could hear was the rush of the blood thrumming in her ears. She touched her cloak, where she'd had a pocket made for the delicate pistol she carried when she had to be out alone at night, and felt its reassuring weight.

The intruder, were he still inside, could not have heard her. Signora Giansante, the woman who lived across the hall, screamed at Helena in rapid Italian and threatened to have her thrown out on the street if Helena made even the smallest sound in the wee hours of the night. Helena wanted to keep this flat, so she'd had much practice at moving soundlessly through the building when she returned home after a performance.

She removed the key from the lock and pushed her well-oiled door open ever so slowly. Avoiding the creaky floorboard in front of the door, she stepped over it, and entered her room. It looked as she'd left it. Tommaso, her striped ginger cat, blinked at her from her table, where he was eating the remains of her dinner, and she relaxed slightly. She'd half expected her room to be ransacked, but nothing appeared out of place. Her gaze traveled over the space and then came to rest on the black boot peeking out from the screen beside her bed.

There was a man in her bed. She drew in a sharp breath, irritated now. Did Damiano think this was the way to win her? Surprising her in her own bed? She would oust him quickly and unceremoniously. She didn't care how perfectly angelic his face. She stomped over to the bed, her slippers making a barely audible humf on the rug, opened her mouth, rounded the screen, and stared. She managed to stop the scream in her throat only because she'd had years of vocal training.

It was not Damiano.

And oh, how she wished it were. She'd rather anyone be in her bed than this man, though she supposed if any man had a right to be in her bed it was he, her husband.

Return to The Spy Wore Blue