Sweet Rogue of Mine 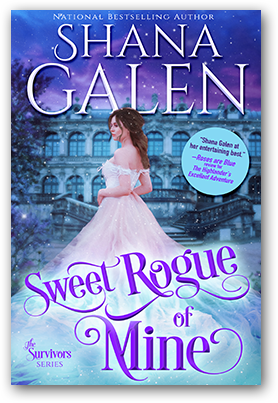 Someone was in the house. Nash Pope might be half asleep and half drunk, but he knew when someone was in his house. He was a trained sharpshooter, and his body was attuned to even the most subtle changes in atmosphere. Just a few minutes before, the air in Wentmore had been stale and still, the only sounds were of mice scampering in the attic and the creak and groan of the ancient timber beams and floorboards settling.

But now the mice had gone silent and the air stirred. The house seemed to straighten and take notice of someone new, someone far more interesting than its current occupant. In the dining room, the curtains closed against the daylight, the lone candle that burned flickered as though the house exhaled softly in anticipation.

Nash raised his head from the sticky table and heard the shuffle of feet and the squeak of a door hinge.

He reached for his pistol. He didn't need to see it. It was an extension of his arm and his favorite pistol by far. He owned at least half a dozen, including a brace of matching dueling pistols made by Manton, a pepperbox pistol made by Twigg, a more decorative pistol he'd purchased from the London gunsmith Hawkins—who liked to advertise that the former American President George Washington owned one of his creations—and this one, made by the Frenchman Gribeauval. Gribeauval had made Napoleon's personal pistol, and though Nash was no admirer of Napoleon, he did admire the French armory of St. Etienne.

Nash's thumb slid over the polished walnut gunstock, over the pewter filigree, until his finger curled into the trigger guard as though it were a well-worn glove. He lifted the pistol, not feeling its weight, though it was heavier than some, and then waited. It would do him no good to seek out the intruder. The world, what he could see of it, was gray and full of shadows. Better to let the interloper come to him. He could still shoot straight if he was still.

All had gone silent. Perhaps the uninvited guest had paused to listen as Nash did.

If the game was patience, Nash would win. As a sharpshooter, he had waited more than he had ever fired at the enemy. He often stood in one spot, unmoving, for four or five hours. He stood in the heat or the cold or, if he was fortunate, in the cool, scented breeze of a spring day. The weather might change, but his rifle at his side never had.

The rifle had been put away. He couldn't sight in the rifle anymore, and it was basically useless to him now, but hitting his target with his pistol and one poorly working eye was possible.

"Nash!" a voice called out. If he hadn't been trained as well, he might have jumped. But Nash's jaw only ticked at his name shattering the silence.

The floorboard creaked again. The intruder was in the foyer. He was not directly outside the dining room. The voice was still too distant.

"Put your pistol down, Nash. I came to talk to you."

Nash did not lower the pistol, though the voice sounded familiar now. Stratford? No, this voice wasn't refined enough. Stratford had been here a few months before. Apparently, he'd sought out Nash's father, the Earl of Beaufort, in London and told him Nash needed him. Stratford obviously didn't know that the earl didn't give a damn about Nash. He'd sent his solicitor, and Nash had fired the pistol he held now over the bald man's head and sent him running back to Town.

A door opened and the man said, "Nash?"

It was the door to the parlor.

"Nash, if you shoot me, I'll kick your pathetic arse all the way to Spain and back."

Nash felt his lips quirk in an unwelcome half-smile, as he finally recognized the voice. "And if I kill you?" Nash asked.

"Then I'll come back and haunt you." Rowden was just outside the dining room now, standing at the door. Nash and Rowden had met in Spain, both serving in His Majesty's army. They'd become close friends, even if their skill sets were quite different.

"If I open this door, will you shoot me?" Rowden asked.

"It depends," Nash said, still holding his pistol at the ready. "Did my father send you?"

A pause. "Of course, he sent me." Rowden spoke like he fought--directly and plainly. He did not pull punches.

"Then don't open the door."

"Shoot me and the next to arrive will be men from an asylum. Beaufort is ready to send you to an institution right now. Mayne and Fortescue managed to talk him out of it and arranged to have me sent instead."

Nash considered. The Duke of Mayne would have done the talking as he was the negotiator of the group. Stratford Fortescue would have decided to send Rowden. Fortescue was always the strategist.

"Why you?" Nash asked. Seeing that Mayne was the negotiator, it would have made more sense for him to come.

"I needed the blunt."

Nash winced and set the pistol down. That hurt. His father was paying Nash's friends to intervene. He expected as much from his father, who had given up on Nash a long time ago. But his friends...still, what could he expect when he had shot Duncan Murray this past summer? That misstep was bound to have repercussions.

"I'm coming in," Rowden said, his tone one of warning. The latch lifted and the door opened. In the flickering candlelight, Nash made out a dark form. Of course, he remembered what Rowden looked like. He was broad and stocky with short brown hair and coal-black eyes. He had a pretty face, or he would have if his nose hadn't been broken so many times. Nash remembered what every man he had ever served with looked like. His memory was more of a curse than a blessing, though, as he remembered every woman and, yes, child he had ever shot too.

"You look like hell," Rowden said, still standing in the doorway.

"I wish I could tell you the same, but I can't see worth a damn."

"Still feeling sorry for yourself, I see."

Nash's hand itched to lift the pistol again, but he was not hot-tempered. He would not have lasted a week as a sharpshooter if he had been. "What do you want, Payne? To what do I owe the pleasure of a visit from one of Draven's Dozen?"

Rowden pulled out the chair at the opposite end of the table and sat. Nash saw only a gray, amorphous shape but his other senses filled in the missing information. "Considering you're one of us, I'm not sure why you're surprised. We Survivors take care of our own."

It was a lie, but Nash decided not to point that out. Not yet. The Survivors were a troop of thirty highly skilled military men who had been recruited as something of a suicide band to kill Napoleon or die trying. Eighteen had died trying. Twelve had come home. They had been brothers-in-arms, but Nash did not feel any fraternal affection now. The others were moving on with their lives, while he would be forever alone, locked in a world of darkness.

"You're thin," Rowden observed. To a stocky fighter like Rowden Payne, thinness was a liability. "Don't you eat?"

"You must need my father's money badly if you're playing nursemaid now," Nash said. Shot fired.

"I want to keep you alive, and no one has to pay me for that."

"I'm alive." But Nash knew that wouldn't be enough. Not after the accident with Murray a few months before. Nash had known some intervention was coming. He supposed he should be glad the Survivors had convinced his father to send Rowden before the men from the asylum. Very little frightened Nash anymore, but the prospect of the next fifty years locked in an asylum drove a spike of fear into his heart. He would put the pistol in his mouth and pull the trigger first. "What do I have to do to keep the asylum at bay?"

"So you haven't completely pickled your brain yet."

"What do I have to do?" Nash repeated. He would do what was required and then, hopefully, the world would leave him alone. After all, he'd given his sight for King and Country. Why couldn't they leave him in peace?

"I don't have a comprehensive list," Rowden said after a pause, during which, Nash assumed, he was looking about the dining room. "Off the top of my head, I would say this old pile needs some repair. It looks like there was a fire at some point."

"And clearly you need to ingest something other than gin."

Nash lifted his empty glass. "This was whiskey." At least he thought it had been whiskey. Maybe it had been brandy.

Rowden let out a quiet grunt. "We'll discuss it. But suffice it to say, I can smell you all the way over here. When was the last time you put on a clean set of clothes or took a bath?"

"Will you scrub my back?" Nash sneered and then was sorry for it. None of this was Rowden's fault. None of this was anyone's fault. Nash had known the risks when he went to war. He just hadn't thought anything would happen to him. He'd been so young. Like most young men, he'd thought he was invincible.

Rowden rose. "I'll make you some coffee. We can start there."

Return to Sweet Rogue of Mine