To Tempt a Rebel 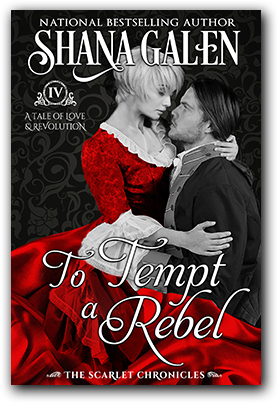 Paris, The Reign of Terror

The King was dead. The Queen was dead. The country was at war and thousands faced starvation as winter approached, promising to be just as harsh and unforgiving as in years past. Tumbrels stacked with corpses fouled the streets, the bodies polluting the Seine when they were dumped unceremoniously into its waters. The cemeteries were filled to bursting. Death and the stench of death was a pall over the city of Paris. And this man—this so-called patriot—thought to lecture her on the theater's choice of play.

Alexandra Martin—Alex to her friends and lovers—tapped her foot impatiently. Her foot was hidden by her skirts. Her face was not, and that she schooled into an expression of rapt attention.

"Voltaire's Irène and The Marriage of Figaro," the patriot droned. "Those are the only acceptable plays to be performed in the Republic."

The patriot's name was Citoyen Chevalier—Tristan Chevalier—and Alex knew where he lived, what he ate for breakfast, whom he slept with, and where he'd received the scar on his jaw. He had been a printer before he'd joined the revolution. His father had been one of the delegates sent to the National Assembly, and the son had stayed in Paris and run the family business. His parents and his sister were dead now. His brother fought with the army on the front, and Tristan Chevalier no longer printed inflammatory pamphlets and libelles. Now he worked for Robespierre, doing the bloodthirsty leader's dirty work.

Today that included warning the actors and owners of The People's Theater, where Alex had been part of the company for the past eight years, that the doors to the theater would be closed and the actors imprisoned if they did not abandon their current offering—Julius Caesar.

"Shakespeare's plays," Chevalier said, reading from a small notebook with a worn blue leather cover, "most especially the histories, such as Julius Caesar, are not permitted."

"Why not?" one of the actors asked.

Chevalier raised eyes the color of café au lait. He looked at each of the actors in turn, trying to discern who had spoken. His eyes rested on Alex only briefly. It had been a man's voice, so she did not interest him. Nevertheless, in that brief instant, she felt her neck grow warm and the heat rise to her face.

"Because," Chevalier answered, "Robespierre has deemed it so."

And Robespierre had probably read Shakespeare and realized that a play about a tyrant might provoke unwanted comparisons in the citizens who viewed it. Much better to keep the public's enmity focused on the ancien regime, now being systematically eradicated on the guillotine's scaffold each day.

"I am happy to answer any further questions," Chevalier said, closing his notebook and securing it in his waistcoat, "at the Salle des Machines."

And from thence the offending actor could easily be sent to the Conciergerie to await trial—or what passed for a trial in this city forsaken by justice.

When no one else spoke, Chevalier turned neatly on the heel of his polished boots and started for the steps. The actors had been called together on the stage of the theater, as it was the only location in the building large enough to fit all of them, and now he walked off the stage and into the rows of seats. The theater was dark, the stage lit only by a scattering of candles and lamps, and his dark blue coat—much in the style of that worn by the National Guard—quickly blended in with the darkness.

She couldn't let him go. In a sense, she'd orchestrated his presence here. She was the one who'd suggested the theater perform Julius Caesar and then coaxed and cajoled Deville until he had persuaded the other theater managers. She'd known the play would not be permitted and Tristan Chevalier would be sent to shut it down. Bringing Robespierre's lap dog here seemed the easiest and least suspicious way to carry out her mission. She'd been ordered to make contact with Chevalier by none other than the Scarlet Pimpernel. The Scarlet Pimpernel—the British hero who had saved so many from the guillotine and who many still argued was only a fiction.

As part of the League of the Scarlet Pimpernel, Alex knew he was no fiction.

Alex went after Chevalier, lifting the hem of her tunic so she would not trip over it. She had been dressing for a rehearsal of the play when Chevalier had arrived and demanded their presence on the stage. Alex might have wished she wore something other than the white tunic with the gaudy gold piping and the black wig of tight curls encircled by a gold band, but she rather thought the flimsy white material might attract Chevalier's attention.

"Citoyen!" she called, running lightly on her sandaled feet. Even in the semi-darkness, she saw his back stiffen. Then he paused and turned sharply to watch her approach.

He was a tall man, though every man was tall to her as she was petite, but he must have been close to six feet. His straight brown hair, streaked with a few lighter strands here and there, had been pulled back into a simple queue and hung down his back to an inch or so below his collar. His eyebrows were dark slashes and his lips a soft peach amid a day's growth of stubble. She imagined he let it grow to hide the angry red scar on his jaw. In time it would fade and turn white, but her information was that the scar was only a few years old and had been deep enough that it would take considerable time to disappear.

He nodded at her, clasping his hands behind his back. He was curt and perfunctory, and not at all the sort of man she was used to dealing with. "Citoyenne Martin." His tongue stumbled slightly over her English name, as though he was not used to the harsher consonants of her native language. "How may I be of assistance?"

She paused as she stood before him and smiled up and into his eyes. "You know my name."

"All of Paris knows your name, citoyenne. You are the famous English actress." His tone was one of disdain, but Alex kept her smile in place.

"Then you know my work?"

He shook his head. "I do not have time to attend the theater. In fact, I am pressed for time now."

Alex had not loved the ancien regime, but she had certainly appreciated the noblemen's manners. These patriots had none. "Allow me to accompany you to your carriage." She hooked her arm through his and waited for him to lead her. He gave her a weary look, one that said he did not have time to pretend he strolled in the gardens, but he placed his hand over hers and led her toward the exit anyway.

"I am afraid you have dealt the company quite a blow today," she said, her voice pleasant and loud enough to be overhead by any who wished to listen. "Costumes and sets do not come cheaply, citoyen."

"Then your company would do well not to waste funds on a play that has not been approved by the Committee of Public Safety."

They stepped into the foyer, where two National Guardsmen jumped to attention and opened the door. Immediately, Alex clamped her teeth to keep them from chattering. It was mid-November, and the weather outside was wet and cold. A gentleman would not have taken her out in it, dressed as she was in a thin costume, her arms bare. But Chevalier was no gentleman.

He stepped outside, and the wind caught her skirts and slapped them against her calves. Her nipples puckered from the cold, but she did not cross her arms over them to warm herself. Instead, she watched Chevalier's eyes, hoping his gaze might dip to the hardened points of her breasts, thereby proving he was human after all. But his eyes never left her face—or rather, a point just to the right of her face.

"Shakespeare is beloved by everyone, the world over. His plays are considered masterpieces."

Chevalier's eyes slid to hers then back to that undefined point again. "The Committee considers them unpatriotic. You do not wish to participate in anything unpatriotic, do you, Citoyenne Martin?"

And there was the veiled threat. She'd been learning everything she could about Chevalier for weeks. He was known for his ability to offer veiled threats, and even more importantly, make good on them.

"No, of course not. The Committee will not find a more ardent patriot than I, citoyen."

"I am pleased to hear it." But his face was a mask of skepticism. She had not fooled him, nor had she expected to. "Good day, citoyenne."

Great princes' favorites their fair leaves spread
But as the marigold at the sun's eye,
And in themselves their pride lies buried,
For at a frown they in their glory die."

He paused, hand on the door to his carriage. "Sonnet twenty-five," he said, his gaze meeting hers directly now.

She raised her brows in both acknowledgement and admiration.

He climbed into the carriage but looked out the window again before signaling to the coachman to drive on. "You play a dangerous game, citoyenne."

She smiled. "There is no other kind worth playing. I do hope to see you again, citoyen."

He looked at her long and hard, as though he might say something more, then he leaned back in the carriage and rapped on the roof.

Alex watched the carriage go, her smiled fixed in place. She had not been certain he would know Shakespeare. Even after all she had gathered about him, she still did not know whether he was merely a sheep following the herd or an intelligent man with his own thoughts.

She was not pleased to have discovered the truth. An intelligent man was even more dangerous. It meant he was a true patriot. Such a man was much harder to sway with bribes or blackmail. This Chevalier did not seek fortune and fame but the ideals the revolution had been founded on.

Such a man could not be easily corrupted, and yet, that was what she must do if she were to save the little king.

Alex's smile faded as the carriage rolled out of sight. It was time she had a serious discussion with the Scarlet Pimpernel.

Return to To Tempt a Rebel