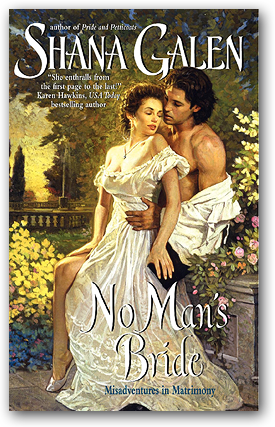 Valentine began to rise, but Catherine waved him back down. "No need to rise, sir. I only came to ask if you would make sure these letters are delivered for me." She handed them to him, and he took them, glanced at the names.

"Of course. How are you feeling this morning? I hope you are not too tired."

Catherine looked down at the floor. She stood at the edge of a brown-and-gold rug. Beneath her slipper, a sliver of hardwood floors winked.

"Sir." She finally looked into his eyes. "I must apologize for last night. I do not know what came over me." She looked down again, unable to hold his gaze and speak of such things. "I did not mean to be so forward." She peeked at Valentine. He was staring at her.

"I see." He cleared his throat and stood, coming around the desk. "I assure you, I was not offended."

"It won't happen again." Catherine forced herself not to back away when he came close to her.

"I sincerely hope that's not true."

She took a deep breath. "I have been thinking about our conversation."

He furrowed his brow. "Is there one in particular?"

"The one in the carriage." She shot him a glare. "You know, the one. About the—ah, marriage bed."

"I have unraveled your plan."

One eyebrow angled upward as he leaned a slim hip on the desk. Funny how she hadn't noticed how slim his hips were until now. He was lean all over—that much she remembered from last night—but she had not appreciated what a long, lithe shape he had and how attractive that could be in a man.

She blinked and tried to refocus. She looked into his face. "Yes, you did. If you think I don't—"

But staring into his face was no better than looking at his body. He was far too handsome, and looking at him always elicited a response in her. She'd known so few men, and none as handsome as this one. His hair, still too long, curled over his collar, and it was inky black against his tan skin. His skin was marred by a dim shadow of beard growth, the color on his chin and cheeks almost a stain on that chiseled face. And his eyes. She had the most trouble there. His eyes were far too soft when they focused on her. They seemed almost...kind.

She shook her head. "What was I saying?"

"Something about you unraveling my plan."

"Right. If you think I don't realize that a marquess needs children—heirs and legitimate heirs—then you must think me a fool, and you've treated me as one, too."

He pursed his lips, opened his mouth, and then closed it again. "I'm not sure I follow."

She sighed in exasperation. Of course he understood! "You told me it was my choice whether or not to share your bed. And you told me"—she pointed accusingly at the ring he'd given her—"this was a symbol of your promise. But what you neglected to mention was that if I chose not to share your bed, that would not solve your problem. Even if you have other women, you still need a legitimate heir."

"Yes, I do, too." She crossed her arms. "So in truth, this ring means nothing, sir. You will either have to bed me against my will or throw me out to achieve your aims."

"Is that so?" He was still leaning against the desk, arms crossed, looking not at all concerned with what she was telling him. In fact—she peered more closely at his mouth—he almost looked as though he were amused by her.

"Sir!" she said forcefully, hoping her tone would make him see the seriousness of what she said. "I do not think you quite comprehend."

He began to work his way around the desk. "Oh, I comprehend, Catie. I think you are the one who does not understand."

She blinked, watching him take another step closer, though her cowardly feet desperately wanted to turn and flee. But she would stand her ground and see this settled between the two of them. "What do you mean, sir?" He was standing close now, and she had to tilt her head up so she could look into his face. "What do I not understand?"

He lifted a hand and brushed a loose strand of hair from her face. She shivered at the intimate touch. He was so close now that he was beginning to have an effect on her. She could smell his scent. It reminded her of their ride yesterday morning—a combination of leather saddles, pine trees, and new spring mornings. She leaned closer.

"Many things, my Catie," he said, and this time when he lifted his hand to stroke her hair back, she anticipated his touch and bent into it.

Her heart was pounding now, and she was so terrified that she needed to count to at least a hundred before she would feel better. But the blood rushing in her ears and the warm zing of Valentine's touch on her cheek made it impossible to think. She could not even remember her numbers. She knew three was a number, but what came before?

Valentine tilted his head down so that his eyes were level with hers. "What you do not understand is that you will come to my bed willingly. You want me as much as I do you."

Return to No Man's Bride